‘Small is small and big is big, latter covers whole rather than an inch’. Yes, it is true, when you put a small banner not everyone is able to see it except those who pass by it and big or large banners can be seen from anywhere wherever you put it except those who have weak eyesight, they are not able to see anything clear whether small or big but it is not always about their big and large size of banners, it is about large and grand format printing that make a banner seeable. 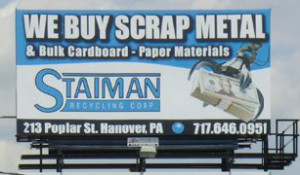 Grand and large format printing has changed the way of printing which was done previously by hands and it took more time which also affected productivity. When there were no grand format printers, billboard banners were hand painted on paper sheets that looked like wallpapers which did not look good. When the large format printers come into existence they change the way of banner advertising totally and they are printed on vinyl material which is anti mildew, black backed, flame retardant and UV resistant that gives guarantee of durability of printing.

Billboard Flex’s large printers print images on 7 or 13 ounce vinyl and up to 16’ wide of length and if any large widths wanted then they are done by weldmaster that seams vinyl material together to make any vinyl size imaginable.

So if any sign shops and companies want their billboard banners printed of large size then Billboard Flex is the right company where printing is done with grand format printers .